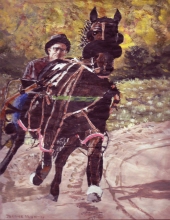 Arthur Varnum, 91, died peacefully in his home in Greenfield on January 30, 2014.
Arthur served in the United States Army in Europe during WWII.

His passion and occupation was horse racing. He owned, raised, trained and raced
standard bred horses at tracks and fairs throughout New England, and occasionally
further afield. One of his best known horses was the fine pacer Volatile.
Arthur also had a love of the outdoors. He was an avid hunter and fisherman.

He is survived by his wife of 63 years, Aileen Dupree Varnum of Greenﬁeld; six
Children; Luke Varnum and his wife Patricia of Greene, ME, Jerome Varnum and
his wife Barbara of Bennington, NH, Jane Varnum of Greenfield, NH, Abigail Van
Alstyne of Malden Bridge, NY, Sally Dyche of Greenfield, NH, and Amy Gowell and
her husband Keith of Lunenburg, MA; 9 grandchildren; 2 great grandchildren and
one great great grandchild. He was predeceased by his son Michael Varnum,
brother Harold Varnum and sister, Mary Jo Murray.

Friends and family are cordially invited to join us for a memorial service at the
Masonic Lodge in West Peterborough on February 15, at 11:30.

To order memorial trees or send flowers to the family in memory of Arthur Varnum, please visit our flower store.