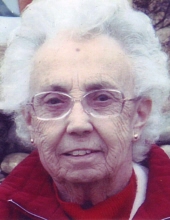 Jaffrey, NH
Barbara H. Christian, 87, of Jaffrey, died on Sunday, July 14, 2013 at the Pheasantwood Healthcare Center in Peterborough after a long and courageous battle with Alzheimer’s disease.
Barbara was born on June 26, 1926 in Jaffrey, daughter of the late Stephen and Marguerite (Duval) Record. She attended schools in Jaffrey and in Nashua.
After raising her family, Barbara went to work outside her home, first at Millipore Corp. in Jaffrey and later at Teleflex Medical, also in Jaffrey, where she retired from in 1992.
Barbara was a communicant of Saint Patrick Church in Jaffrey. She enjoyed knitting and reading, as well as solving crossword puzzles in her free time, but most important to Barbara was her family.
She was predeceased by her husband, Alonzo J. Christian, and by many beloved friends and family members.
Barbara is survived by her 3 daughters, Judy L. Ouellette of Jaffrey, Susan M. Marrotte and her husband David of Rindge, and Michele A. Christian of Jaffrey; her son, Stephen A. Christian and his wife Charlene of Jaffrey; 11 grandchildren, 14 great-grandchildren, and many nieces, nephews, cousins and friends.
Friends and family are warmly invited to calling hours on Wednesday, July 17, 2013 from 5:00 to 8:00PM at the Cournoyer Funeral Home and Cremation Center, 33 River Street, (Route 202) Jaffrey.
A Mass of Christian Burial will be celebrated on Thursday, July 18, 2013 at 11:00AM at St. Patrick Church, 89 Main Street, Jaffrey. Most Reverend Francis J. Christian, Auxiliary Bishop of Manchester will officiate. Burial will follow in Saint Patrick Cemetery, Jaffrey.
The family respectfully requests that in lieu of flowers, Memorial Contributions be made in Barbara’s memory to the Jaffrey-Rindge Memorial Ambulance, P.O. Box 107, Jaffrey, NH 03452-0107, or to the Alzheimer's Association, New Hampshire Office, Five Bedford Farms Drive, Suite 201, Bedford, NH 03110

To order memorial trees or send flowers to the family in memory of Barbara H. Christian, please visit our flower store.