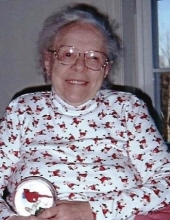 Bernie, as she was affectionately known, was the daughter of Silas and Antoinette Duval and the last surviving member of her siblings. At sixteen, she met the love of her life, Bob, whom she married in 1936. She was a devoted wife and they enjoyed 69 years of marriage together. Her life was dedicated to her husband and three children. She is survived by her son Gordon and his wife Adele of Dublin, New Hampshire, her twin daughters Janet Brown and her husband Tom of Longmont, Colorado and Janice Lutzen and her husband Norm of Stafford, Connecticut. She was a grandmother to nine, great- grandmother to ten, and a great-great grandmother to one.

Her years of employment outside the home were at Honeywell, New Hampshire Ball Bearing and Millipore. Bernie could always be found in her kitchen and was her happiest when she could share her cooking with visitors. She will be fondly remembered by many as a skilled seamstress and for her custom Irish knit sweaters. Bernie especially loved the summer. She enjoyed swimming, boating, fresh vegetables from the garden, gazing at the many flower beds, watching birds on the pond and most of all picking blueberries which fortunately she was able to do until this past year.

In 2008, Bernie became a resident of Summerhill which soon became a second home for her. Her quick wit brought smiles to residents, caretakers and visitors alike. Bernie’s family offers heartfelt gratitude to her caregivers at Summerhill and for the love and friendship that was shown during her entire stay with them.

There will be no calling hours. Following the wishes of Bob and Bernie, interment of their co-mingled ashes will be at the convenience of the family.

Bernie will be remembered for having a great love of animals, dogs being her favorite. Donations, in memory of Bernie, may be made to the Monadnock Humane Society at 101 W. Swanzey Road, Swanzey, NH 03446.

To order memorial trees or send flowers to the family in memory of Bernadette 'Bernie' Knight, please visit our flower store.