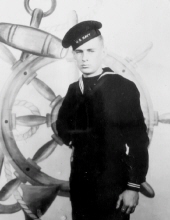 Bernard Ernest Lampinen, 95, formerly of Ashby, MA, peacefully passed away after a period of declining health, at UMass Memorial HealthAlliance Hospital in Leominster, MA. The WWII Veteran answered his final roll call at 6am sharp on April 7, 2022, surrounded by his loving family.

‘Bernie’ was born in Atlantic Mine, Michigan on September 3, 1926, a son of the late Arthur and Hilma (Jampsa) Lampinen and was raised on the family’s 300-acre Onnela Farm. He graduated in June of 1944 from the Houghton (MI) High School, and enlisted with the US Navy in August 1944, attaining the rank of Seaman, First Class. He proudly served his country in the Pacific Theater during WWII, manning the 40mm anti-aircraft guns on the battleship USS Iowa off the coast of Japan. He also served on the aircraft carrier USS Yorktown, helping to launch airplanes. After his honorable discharge from the Navy in June 1946, he attended art school on the GI Bill and personally met Henry Ford while working for Ford Motor Company. Bernie attended Henry Ford's funeral service and passed away on the 75th anniversary of his death.

He married his sweetheart, Hester Irene Somero, on April 23, 1949, and began working, designing, and painting signs on buildings for U.P. Neon, in Hancock, MI, before opening his own business, called ‘ArtVertising Service’ in Chassell, MI. After welcoming the first six out of eleven children into the world in Michigan, they moved their young family to New England and he worked at Seppala & Aho Construction in New Ipswich, NH, assisting with Architecture and Design until his retirement in 1991. He continued to provide architectural drawing and sign lettering services, part time from his home office until just a few years ago.

Bernie and Hester raised their family of eleven children in Ashby, MA and enjoyed the addition of sixty- one grandchildren, one hundred and fifty-seven great-grandchildren, and thirty-four great- great- grandchildren. He loved being surrounded by the grandchildren and traveling with his bride, including several trips to Finland, Sweden, and Norway. He was a talented artist with a passion for drawing and painting. He enjoyed reading, baseball & hockey in his younger years, trout fishing, tending to his fruit trees and berry crops and he continued to keep his garden and drive his tractor into his 90’s. Most of all, he loved his Lord and Savior Jesus Christ. He was a member of the Apostolic Lutheran Church in New Ipswich, NH for 59 years and shared the Gospel as a lay preacher, often taking trips to visit and serve people in need and to hold church services in small churches and homes out of state. Throughout his life he boldly shared the Gospel, even during his recent stay in a nursing home and during his final days in the hospital.

In addition to his parents, Bernie was also preceded in death by his beloved wife Hester, after 72 years of marriage, on July 27, 2021, and by his daughter, Jill Traffie on April 17, 2021. He was also predeceased by his five sisters; Irene Ovist, Florence Westerholm, Mildred Lampinen, Mabel Singer, and Leona Allread, and by his five brothers; Wilbert, Ormand, Robert, Walter, and Wesley, and by a grandson Braden Somero and a great- great granddaughter Esther Traffie.

To order memorial trees or send flowers to the family in memory of Bernard Ernest Lampinen, please visit our flower store.