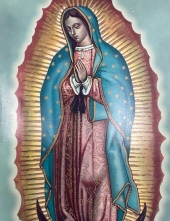 Brian died at home on November 9th, after a protracted period of declining health. He was 70 years old. His tertiary name was Brother Michael, MICM, Tert.

Brian practiced the First Saturdays Devotion to the Immaculate Heart, and had received all the sacraments just four days prior to his death.

The Irish American son of pious Catholic parents, Brian was born and raised in West Orange, New Jersey, where he attended parochial school. He graduated from Essex Catholic High School in Newark, which was administered by the Christian Brothers of Ireland.

After attending junior college in California, Brian, impelled by the influence of his devout mother, traveled to New England to seek out the Slaves of the Immaculate Heart of Mary at the Saint Benedict Center. He would spend the remaining 49 years of life at the Saint Benedict Center, first as a student, and later as a teacher, catechist, writer, editor and lecturer.

Under the tutelage of Brother Francis Maluf, MICM, Brian studied philosophy, theology and New Testament Greek and Latin. He would go on to spend a year studying at the Angelicum in Rome.

For many years, Brian served the Center's apostolate as Editor of their magazine, From The Housetops, their newsletter, Mancipia, and their website, Catholicism.org. He was also a contributing columnist to all three.

From 1999 to 2005, Brian was was editor-in-chief of Loreto Publications. He was a regular speaker at the Saint Joseph Forum in Indiana, and also lectured at the Saint Benedict Center Conferences in New Hampshire.

Brian Kelly was an old and dear friend, a fervent and apostolic Catholic, an erudite scholar, a gifted writer, a devoted husband to his wife Gwendolyn, and a humble and forbearing Christian gentleman. He will be sorely missed.

The Friends of Saint Benedict Center wish to extend our heartfelt condolences, on the occasion of their grievous loss, to Gwen Kelly, to Brian's sister, Mary Sue, and to the rest of Brian's family.

Brian will be waked on Monday, November 14th, at the Cournoyer Funeral Home at 33 River Street, in Jaffrey, New Hampshire, from 2:00 PM to 6:00 PM.

A Requiem Mass will be celebrated at Saint Stanislaus Parish in Winchester, New Hampshire, at 10:00 AM on Tuesday, November 15th.

Burial will be at the Saint Benedict Center in Richmond.

To order memorial trees or send flowers to the family in memory of Brian Douglas Kelly, please visit our flower store.