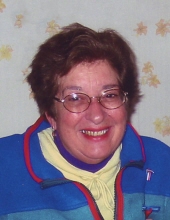 Carolyn was born in Providence, Rhode Island on September 10, 1941 to Al and Louise (Troendle) Houle. Her mother died when she was only four years old. She and her three sisters were raised by their father (unheard of at that time) in Nasonville, Rhode Island and later moved to Exeter, New Hampshire. She graduated from Exeter High in 1959 and attended the University of New Hampshire, where she majored in Art. Upon graduation, she married Reino Lilback, a fellow UNH student, and worked as an art teacher in Kentucky, Ohio, and Canterbury, NH. The two eventually settled in his hometown of Fitzwilliam. In 1970, Carolyn gave birth to a daughter, Carlotta, and in 1972 a son, Matti. The couple built a home on family property on Webb Hill Road in 1976.

Over the years, Carolyn worked as a school bus driver for Cheshire Transportation (later
Laidlaw) and as a caregiver for Autumn Passages. She took courses at Franklin Pierce College in graphic arts, photography, and stained glass. While a student, she wrote a play about her experience at UNH. “12 Ballard Street” was produced and shown at the Ravencroft Theatre.

Carolyn’s creative pursuits included watercolor painting, studying with Fitzwilliam’s Alan Thompson, as well as writing poetry and short stories. She was a prolific reader of both fiction and historical non-fiction, frequenting the Fitzwilliam Library on a weekly basis.

Carolyn and Reino worked hard and lived frugally to send both of their children to college. Carlotta graduated from Wellesley College in 1992 and Matti from his parents’ alma mater, UNH, in 1995. Their one splurge was a cruise on the Rhine River for their 25th wedding anniversary.

Carolyn retired in 2004, after her husband’s death, and cared for her granddaughter, Carmen Lilback Pini, on a regular basis, teaching her to draw, paint, and play Gin Rummy.

Carolyn is predeceased by her husband of 37 years, Reino Lilback, and her sister, Judith Houle of Barnstead, NH.

To order memorial trees or send flowers to the family in memory of Carolyn Houle Lilback, please visit our flower store.