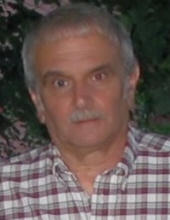 Charles ‘Dick’ Romano, Jr. 73, of Rindge and formerly of Fitchburg, MA died peacefully on Monday June 17, 2013 at his home after a six month long and courageous battle with cancer.

Dick was born on May 2, 1940 in Fitchburg, MA, son of the late Charles R and Mary (Ciannella) Romano. He attended schools in Fitchburg and married Judy C. Progin in 1958.

Dick had built several homes with his uncle in the 50’s and later worked as a mason for Peabody Construction and then for Boeing briefly in Seattle, Washington before becoming an owner and operator of R. Romano Construction and Romano Overhead Door where he eventually retired from in 2005.

Dick loved target shooting and had a strong historical interest in World War II weaponry. He also enjoyed occasional visits to Foxwoods and Mohegan Sun and was able to make one last journey there in March.

There will be no calling hours.

To order memorial trees or send flowers to the family in memory of Charles 'Dick' Romano, Jr., please visit our flower store.