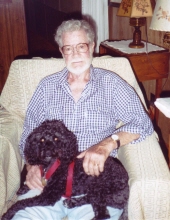 Charles “Jerry” O’Connor, Jr., 92, formerly of Jaffrey NH died on April 23, 2014 at the Maplewood Nursing home in Westmoreland, NH after a period of failing health.

Mr. O’Connor was born on June 26, 1921 in Nashua, New Hampshire, son of the late Charles G. O’Connor Sr. and Florence (Hutchinson) O’Connor. He was graduate of the former Peterborough High School in 1939. Although Mr. O’Connor spent 18 years in Hernando, Florida during the winter months, he called Jaffrey his home.

Mr. O’Connor was a Machinist for the New Hampshire Ball Bearing Company in Peterborough, NH for over 10 years. He also worked for Starrett Tool in Athol, MA, making gauges and micrometers, John R. Hackler Motors, in Jaffrey, NH, Motor Tire Service in Fitchburg, MA. He had also worked at the Woodbound Inn in Rindge, NH as a Maintenance technician and for the Peterborough, NH Elementary School as their Custodian. He was a member of the Rindge School Board and an assistant scoutmaster with Troop 308 in Rindge for many years.

He was predeceased by his wife of over 65 years, Jacqueline R. (Burt) O’Connor and his son Shannon O’Connor.

Graveside services will follow at 12:00 noon at the family lot in Hillside Cemetery on Goddard Road in Rindge, NH.

To order memorial trees or send flowers to the family in memory of Charles "Jerry" O'Connor, please visit our flower store.