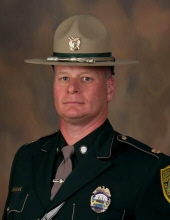 Christopher Patrick AuCoin of Wilton, NH passed away suddenly and unexpectedly on Wednesday, December 7, 2022, at the age of 52.

Chris lived in Jaffrey when he was young, and later moved to Merrimack, NH where he graduated from Merrimack High School in 1989.

After high school, Chris joined the United States Marine Corps. He served from 1989 to 1994 and completed basic training at MCRD Parris Island, South Carolina. His military occupation specialty was infantry rifleman, where he was an expert in combat arms and tactics and fire team/squad leadership. He was assigned to New Hampshire’s own Bravo Company 1st Battalion 25th Marines. This infantry rifle company was highly trained as a cold-weather mountain warfare unit, training both here in NH’s White Mountains, and in northern Norway with NATO, in joint teamwork exercises. He fought courageously in the Persian Gulf War and made numerous lifelong friendships with his fellow Marines. He has always been a loyal friend, and a dedicated service man which manifested in meritorious service during his years as a Marine. Chris was always the first to volunteer for difficult assignments and ceaselessly gave maximum effort in all missions during Operation Desert Storm. He excelled as a natural leader, and motivated other Marines with his dedication and pursuit of excellence.

Chris had earned the rank of Lance Corporal and consistently kept his fire team at maximum combat effectiveness. He also displayed strong composure and was an uplifting presence during the difficult times. In one particular event, a Gunnery Sergeant was checking the frontline positions late at night and found Chris lifting weights with a pole attached to sandbags, down low in his fighting position. Just as his dedication to lifting never changed due to circumstances, nor did his selfless service to his country and his friends ever change. Chris served his country with honor and distinction, earning the Combat Action Ribbon, the Southwest Asia Service Medal, the National Defense Service Medal, the Sea Service Deployment Medal, and the Kuwait Liberation Medal. He was an inspiration to all who knew him.

After his service with the Marines, Chris came home and studied criminal justice, and earned his bachelor’s degree in business administration from Southern New Hampshire University. He was currently enrolled in the master’s program for psychology at SNHU.

Chris’ law enforcement career began when he was hired by the Amherst, NH Police Department in 1991 and graduated from the 95th New Hampshire Police Academy. He was hired by New Hampshire State Police on June 11, 1993 and was assigned to Troop B as a Trooper where he served as a Field Training Officer and S.W.A.T. Unit member. In 2003 he was promoted to Sergeant at Troop B and in 2004 he was named Commander of the SWAT Team. In 2005, Chris was transferred to Troop C, when he accepted a promotion to Staff Sergeant as the Assistant Troop Commander. His time away from Troop B would be short as in 2008, he would return as the Troop Commander with a Rank of Lieutenant. Upon promotion to Captain in 2011, Chris spent time in both Operations and Support Services prior to his final promotion to Major in 2012. He retired from the division in 2015, with over 22 years of dedicated service. Chris’s career accomplishments can only be summarized by the men that walked beside him, as brothers. Chris was proud to know and serve with all of his friends, and the AuCoin family is forever grateful for the men and women that never left Chris’ side.

Chris enjoyed weightlifting, hiking, running, biking, skiing, fishing, cooking, and cherished bringing his girls lattes. He completed multiple marathons and Iron Man competitions. Physical fitness was a staple in his life. Chris first was a Marine, then a leader in the New Hampshire State Police. He contributed to the well-being of us all. He loved God, family, his country, and lived his life as such.

Chris is predeceased by his grandparents Elmer AuCoin in 1991, Albertena AuCoin in 2017, and Leona LeTourneau in 2005.

Chris will be forever remembered by his parents, Brent and Paula AuCoin, his wife of 29 years, Tracy (Key) AuCoin of Wilton, NH, his three daughters, Kelsey AuCoin and her fiancé Kyle Behnert of York, PA, Bethany AuCoin and Lindsay AuCoin both of Wilton, NH, his two brothers, Nate AuCoin of Rindge, and Chad AuCoin of Bennington, his friends of the New Hampshire State Police and the US Marine Corps, as well as many nieces, nephews, cousins aunts and uncles.

Chris’ funeral service will be held Tuesday, December 13, 2022, at 11:00 AM at Hope Fellowship Church. Chris will be laid to rest with full Military Honors at New Hampshire State Veterans Cemetery in a private family ceremony.

In lieu of flowers, please consider making memorial contributions in Chris’s name to On The Hunt, Veteran Strong, Inc., a 501(c)3 nonprofit corporation which helps Veterans by getting them into sharing outdoor adventures. donations@onthehuntveteranstrong.org.

To order memorial trees or send flowers to the family in memory of Christopher P. AuCoin, please visit our flower store.