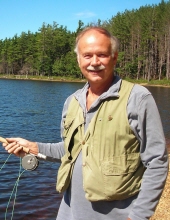 David A. Patterson, 73, of New Ipswich and formerly of Townsend, MA, died peacefully at his home with his family by his side on Thursday, November 17, 2022, after a period of failing health.

David was born in Sommerville, MA on October 7, 1949, son of the late Alexander and Betty (Davis) Patterson. He was a graduate with the Class of 1967 from Billerica Memorial High School and had earned his Bachelor of Science from Boston State College before earning his Master of Science Education from Fitchburg State College.

David loved all New England sports teams. In fact, when he met his future wife in college, their very first date was a Celtic's game! David married the love of his life, Ann L. Pezzella on February 15, 1974, and together made their home in Townsend, MA before moving to New Ipswich, NH. He enjoyed a long and challenging career as a high school Biology teacher, and had played on the teacher’s golf team for many years.

In his free time, and in addition to golf, David also enjoyed gardening, fishing, camping, traveling, and he loved any time spent with his family. He also authored the popular guidebook ‘Freshwater Fish of the Northeast’ in which his son contributed all of the illustrations for. Liking all animals, David belonged to the Fitchburg Rod and Gun Club, and enjoyed many pets through the years. His garden will be most remembered for his Atlantic Giant Pumpkins which David grew for many years, all weighing several hundreds of pounds.

Family and friends are warmly invited to Calling Hours which will be held on Tuesday, November 22, 2022 from 10:00 to 11:00 AM at the Cournoyer Funeral Home & Cremation Center, 33 River Street, (Route 202 South) in Jaffrey, NH from

A funeral service will immediately follow calling hours beginning at 11:00 AM and burial will follow in Smithville Cemetery, on Binney Hill Road in New Ipswich.

To order memorial trees or send flowers to the family in memory of David A. Patterson, please visit our flower store.