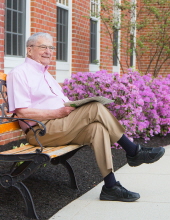 David Hammond Barlow passed away peacefully in the overnight hours of November 26, 2018 in the comfort of his home at Bentley Commons.

He was born in August of 1929, in Somerset, Massachusetts to the late Benjamin and Mattie (Dearden) Barlow. An individual of courage and perseverance, he battled a life-threatening illness in his youth, surviving it while retaining an optimism and steadfast cheerfulness that carried him smilingly through all these many years.

David was a graduate of Somerset High School after which he attended the Spartan School of Aeronautics in Tulsa, Oklahoma. In 1951 he joined the Air Force serving in the Korean air training Command at Randolph Air Force Base in San Antonio, Texas. It was during a long train journey home on leave that he met the woman he knew he was meant to marry. Kathleen was the love of David’s life and, in fact, their courtship was conducted over the next four years primarily via love letter between Texas and Virginia! They married in Arlington, Virginia, and after the birth of their first child settled in Littleton, Massachusetts where they joyfully brought two more children into the world. In 1984 they pulled up roots for New Hampshire, spending 24 years in Peterborough and another six years in Jaffrey until Kathleen sadly passed away in 2013.

An industrial sales engineer for most of his working life, his career began at MIT Instrumentation Lab in Bedford, Massachusetts followed by a lengthy stint with Stewart-Hunt in Burlington, Mass. In New Hampshire, he joined MPB (now Timken) in Keene, concluding his career with GMN out of Chicago. Dad had a true engineering mindset and loved to puzzle out solutions to mechanical problems, often creating gadgets to make life easier around the home, but also on a larger scale inventing an energy-saving tanning drum drive for the leather industry which earned a patent. He was a modest man not taken to boasting, but sure was proud of that invention!

Church and community service were very important to him, and he served in many roles over the years including church elder, deacon, Sunday school superintendent and teacher. Civic engagement included Town assessor, president of the Littleton Lyceum (the oldest continuous running Lyceum in the USA), and many offices in the Mattawanakee Association concluding as President. A voracious reader, he had a passion for historical novels and could hold a person spellbound with a retelling of details of events around the world from B.C. to the 1900s. There was always a lot to learn from him! Ever the gentleman he always learned people’s names and took an interest in their lives, remembering even the smallest details when they would next meet. At Bentley Commons he developed many good friendships with both residents and staff and received a level of care and caring there that his family is eternally grateful for.

David’s greatest pride of all was his family, who will miss him with all their hearts. He is survived by children Susan, Kenneth and Stephen and their spouses Paul, Denise and Cheryl; his grandchildren Sarah, Erika, Samantha, and Ashleigh; his great-grandchildren Ethan, Elise, and Hailey; and a number of beloved nieces and nephews and families. He was predeceased by his beloved Kathleen, brother Allen, and sisters Jean and MaryJo.

To order memorial trees or send flowers to the family in memory of David Hammond Barlow, please visit our flower store.