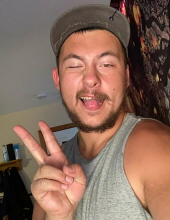 He was born in Deland, Florida on September 10, 1999, son of Christopher and Tricia (Jewett) Tucker. They will miss him, and he will also be missed by his sisters, Jasmine and Talia, his maternal grandparents, Steven & Tammy Jewett of Orleans VT, and paternal grandparents Stephen & Terry Tucker of Stoddard NH, his great grandparents, and by several aunts, uncles, cousins, his girlfriend Candise Harrison, and many friends.

Dawson’s family had made Greenville their home since 2000, where he was raised and attended local schools. After graduating from Mascenic Regional High School, Dawson began his career in Roofing and had worked with Prime Roofing Corp in New Ipswich as well as a few local residential roofers at different times.

Dawson fell in love with machines after the first car show his Dad and Uncles took him to. He wanted to learn it all and would spend hours at the garage in Sterling with them. (Learning new swear words)
Dawson loved to fish and had an eclectic taste in music. From classic rock to rap to country. He could sing but didn’t like to in front of people. He had a beautiful voice.

But what made Dawson .. Dawson… was his goofball personality. I could never stay mad at him. He would look at me and “But Maaaaa.”
It is because of you I will someday write the book “Things I never thought I’d hear myself say.” Like…
~ Wedgies are banned in this household; I want grandbabies someday.
~ Dawson, Stop licking the windows. (Seriously, car windows at that)
~ No, lizards do not take baths in the washing machine.
~ No, I can’t buy Talia another birthday. (They share a birthday for those unaware)
~ Why is there a tape measurer in the shower?
I know I swore I’d never tell anyone about the tape in the shower but, come on that’s funny.

I’m sure everyone has their own favorite Dawson stories. Please share them.

Calling hours will be held on Thursday, November 18, 2021, from 4:00 PM to 6:00 PM in Cournoyer Funeral Home, 33 River Street, Jaffrey, NH. All are welcome to attend. Dress is casual. Please wear something purple for Dawson. It was his favorite color.

Funeral Services and burial will be private.

To order memorial trees or send flowers to the family in memory of Dawson Brownell, please visit our flower store.