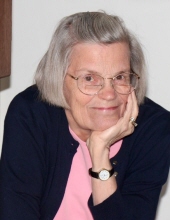 Dorothy was born on June 7, 1934, to Robert and Katharine (Slade) Newbegin in Mexico City. As a child, she lived all over the world: Washington, DC; Istanbul; Ankara; Bogota; Santo Domingo; Paris; Cambridge, Massachusetts; and Jaffrey, New Hampshire. She attended Milton Academy and earned her bachelor’s degree from Bryn Mawr College and her master’s degree from Fitchburg State University.

After marrying Harold “Dave” Davis in 1956, their travels continued to California, Alaska, New York, Pennsylvania, and Wisconsin before settling in Groton, Massachusetts for 52 years. She was a wonderful wife and a devoted mother to her children.

Dorothy had a long career as a dedicated teacher and school librarian, eventually becoming Director of Library and Media Services for the Groton-Dunstable Regional School District. She was also involved in her community as president of her Teacher’s Union and through church activities, town committees, and political involvement. October 27, 2014 was proclaimed “Dorothy Davis Day” in Groton in honor of her 32-year service on Groton’s Cable Television committee. Dorothy enjoyed cooking and mysteries. Those who knew her well will remember her for her warm humor, her love of books and deeper love for her friends and family, and her willingness to consider all sides of an issue.

Dorothy is survived by her husband, Dave; her children Kate Davis and Rob Davis; their spouses Brian Michalowski and Christine Schloder; her grandchildren Nik Bordia and his wife Randi-Lynn Santa Cruz, Sam Bordia, Andrew Davis, and Julia Davis; her great-granddaughters Astrid Bordia and Solaris Fajardo; her brother-in-law Peter Davis; her sister Anne Webb and brother-in-law Cassius Webb; three nieces and a nephew. Her loss will be deeply felt by all.

Funeral services will be held Saturday, November 5, 2022, at 11:00 am at First Church in Jaffrey, 14 Laban Ainsworth Way, Jaffrey, NH 03452. The service will be followed by the interment of her ashes in the Old Burial Ground.

In lieu of flowers, memorial donations may be made to First Church in Jaffrey UCC.

To order memorial trees or send flowers to the family in memory of Dorothy Newbegin Davis, please visit our flower store.