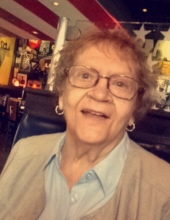 Edith was born on August 5, 1939 in the Bronx, NY a daughter of the late William and Mary Hicks.

Raised and educated in the Gardner, MA. Edith later moved to NH where she lived for many years in Rindge and later Jaffrey, where she raised her family after marrying Arthur Wallace Snow. Later moved to Hillsboro, NH with her daughter.

Edith worked for many years at New Hampshire Ball Bearings in Peterborough, NH and Teleflex Medical in Jaffrey, NH as a quality control manager.

When Edith wasn’t working she enjoyed spending time her grandchildren who she adored so very much, loved the water, playing bingo, and her real love singing and dancing.

In addition to her parents, Edith was pre-deceased by her husband Arthur Wallace Snow and her sister Ruth Ozzello.

Survivors include her sons, Timothy Ashmore of Florida, Arthur William Snow and his wife Renee of Jaffrey, NH; Daughter, Mary Jo Pedersen of Hillsboro, NH; One Brother, Norman Hicks of Winchendon, MA; five Grandchildren and 2 Great Grandchildren and many niece’s nephews and cousins.

SERVICES: In accordance with Edith’s wishes there will be no formal services at this time, after cremation her ashes will be buried with her husband, Arthur in the Conant Cemetery, here in Jaffrey, NH. Donations can be made in her name to the American Legion post 11, 20 Webster St. Jaffrey, NH 03452

To order memorial trees or send flowers to the family in memory of Edith R. Snow, please visit our flower store.