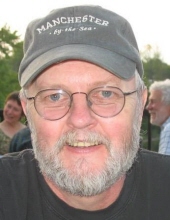 Edward J. Hyland, 61, of Bennington died peacefully on Sunday July 12, 2015 at his home, surrounded by the love of family and friends.

Ed was born December 23, 1953 in Beverly MA., son of the late Joseph Hyland and survived by Virginia (Crosby) Hyland.

Ed grew up in Manchester, MA, in the warm embrace of a large and loving Irish-American family. As a young teenager, he was drawn to exploring the mysteries and rewards of the written word.

By the time he was sixteen, Ed gave his first poetry reading at the Boston Globe Book Festival. The next year, he was invited to the prestigious Bread Loaf Writer’s Conference in Vermont as one of the youngest attendees in its long history and had the privilege to work under Robert Hayden and Miller Williams. This experience greatly influenced Ed’s life as a poet.
As a headstrong young man filled with curiosity, Ed struck out on his own, thumbing his way a number of times across America. Over the coming years, he was a reader at various colleges, universities and festivals, and studied with a number of poets including Pulitzer Prize winners James Tate and Charles Simic. This passion eventually led him to a poetry group where he would meet Robin, his future wife. Together they would inspire each other’s writing, culminating in Ed’s book Faith in Winter.

Ed worked in a variety of settings from hardware store attendant to factory heat treatment technician. He found himself at home in the field of human services with his wife, Robin. They ran group homes, both in Antrim, NH for the Monadnock Worksource. He worked with and cared for individuals with developmental disabilities for more than three decades. He and his family opened their home for more than 25 of those years to five individuals.

He is survived by his wife of thirty two years, Robin Bixby-Hyland, his son Dillon Hyland; daughter Emilee Hyland all of Bennington. He is also survived by his brother Joseph Hyland Jr of Concord, sisters Sally McDonough and Catherine Hyland both of Hollis, and sister-in-law Dyann Hyland of Baytown, TX. He leaves behind numerous nieces and nephews.

Family and friends are warmly invited to calling hours at the Cournoyer Funeral Home and Cremation Center, 33 River Street (Route 202) in Jaffrey on Friday July 17, 2015 from 3:00 to 7:00PM.

A Memorial Service will be held at the Cathedral of the Pines, 10 Hale Hill Road, Rindge on Saturday at 3:00PM. Burial at Evergreen Cemetery, Bennington to follow.

To order memorial trees or send flowers to the family in memory of Edward J. Hyland, please visit our flower store.