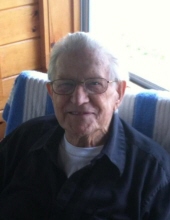 Forrest E. Burbee, 92, better known as “Bud” to his family and friends, formerly of Jaffrey, died Tuesday May 5, 2015 at the Community Hospice House in Merrimack following a long illness.

He was born July 15, 1922 in Jaffrey and had attended local schools.
His formative years were spent in Jaffrey and in 1949 he and his family moved to Peterborough where they lived for thirty years. He then moved back to Jaffrey in 1977 where he lived until 2013 when he moved to Milford to be closer to family.

“Bud” had served in the United States Army during World War II. He was awarded the Purple Heart for wounds received in action on June 18, 1944. He was on the second wave on Omaha Beach at Normandy, France. He also saw action at the Battle of the Bulge in the Ardennes region of Germany and in Central Europe, including Italy and Sicily.

Forrest was employed with A&P Grocery Stores for more than twenty eight years, and following that he had worked in maintenance at Rivermead in Peterborough for several years.

“Bud” was huge fan of the Boston Bruins and was known locally for his cowboy hats that he always wore.

He is survived by his wife of 67 years Marcelle C. Burbee of Milford; his son Wayne R. Burbee of Laconia ; a daughter Sharon A. Lynde of Palm Bay, Florida; four grandchildren; five great grandchildren; as well as a large extended family.

Funeral services will be held at the Cournoyer Funeral Home and Cremation Center, 33 River Street (Route 202 South) in Jaffrey on Friday May 8, 2015 at 2:00PM. Rev Wilfred H. Deschamps, pastor of St. Patrick Church in Jaffrey will officiate.

Burial with full military honors will follow in St. Patrick Cemetery in Jaffrey.

The family has requested that in lieu of flowers, memorial contributions be made to either The Wounded Warrior’s Project, P. O. Box 758517, Topeka Kansas, 66675 or to St. Jude Children’s Research Hospital, 501 St. Jude Place, Memphis TN 38105.

To order memorial trees or send flowers to the family in memory of Forrest 'Bud' Burbee, please visit our flower store.