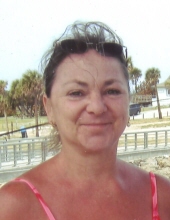 Gale S. Bailey, 63, of Fitzwilliam, NH died peacefully on Tuesday, January 3, 2017 at her home after a period of failing health.

Gale was born in Peterborough during a blizzard on December 21, 1953. She was the daughter of the late Andre and Betty (Burnham) Gagnon. She was a 1971 graduate of Conant High School in Jaffrey and had lived in the Monadnock Region her entire life.

She had worked administratively at New Hampshire Ball Bearing in Peterborough before working at Stan’s in Troy and had retired after helping as a bookkeeper at Bottoms Up in Fitzwilliam.

Gale was very creative and enjoyed quilting and coloring the more intricate designs in the newer coloring books. She always loved traveling with her husband to their winter vacation home in Florida and feasting on Lobster.

Gale is survived by her loving husband of almost 30 years, Donald M. Bailey of Fitzwilliam, and by her 2 step-daughters, Lori A. Wells of Douds, Iowa and Lindsay Andrews of Boston, Massachusetts, and by her step-son Corey Bailey of Douds, Iowa, as well as her grandchildren, Audrey, Haley, Benjamin, Sarah and Hannah. She is also survived by her sister, Janet Wilkinson of Fitzwilliam, and by her 2 brothers, Andre Gagnon of Rindge and Lance Gagnon of Jaffrey, as well as many nieces, nephews, cousins and close friends.

At Gale’s request there will be no calling hours or funeral services at this time.

To order memorial trees or send flowers to the family in memory of Gale S. Bailey, please visit our flower store.