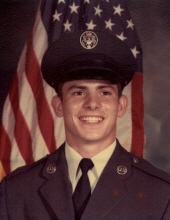 George ‘Ed’ Stockdale, Jr., 59, of Ware, MA, died peacefully on Wednesday, May 29, 2019 at Mercy Hospital in Springfield, MA with his family by his side after a period of failing health.

Ed was born in December 26, 1959 in Baltimore, MD, son of the late George and Patricia (McNair) Stockdale, Sr. He was raised in Jaffrey and graduated from Conant High School in 1978. Ed enlisted in the US Air Force and served our country from 1979 to 1982 at Minot Air Force Base in North Dakota. After his honorable discharge, Ed returned to Jaffrey and worked as an Injection Molding Engineer and Supervisor for Millipore until he and his family moved to Bennington, VT. He had worked at Mac Molding in Ludlow, VT until his health prevented him from doing so.

In his spare time, Ed like playing pool, bowling, hiking and camping, and enjoyed time spent with his family, especially his granddaughter, Allie.

Ed had married Sherry (Morin) Stockdale in August of 1997 in a beautiful ceremony in Jaffrey. They enjoyed 23 years together in marriage. In addition to his wife, Ed is survived by his family, Cyndi Stockdale of Chicopee, MA, Chris Stockdale of Brockton, MA, Irma Ramos and Rita Bryan, both of Napoleon, OH, Penny Stockdale-Gaspar and Patricia Niskala, both of Jaffrey, NH, James Stockdale of Troy, NH, Edgar Stockdale of Portland, Maine; 3 grandchildren, Alizehya, Jericho and Ryan, and many nieces, nephews, cousins and friends.

A graveside service will immediately follow calling hours at 11:00am in the family lot at Conant Cemetery on Stratton Road in Jaffrey. Rev. Mark Koyama, Pastor of the United Church of Jaffrey will officiate.

To order memorial trees or send flowers to the family in memory of George 'Ed' Stockdale, Jr., please visit our flower store.