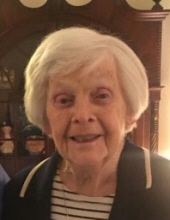 Amie' Geraldine Thierry Lyle, 95 of Jaffrey Center and Peterborough, died Tuesday morning, at her home at RiverMead in Peterborough, after a period of failing health.

She was born on January 12, 1924, in Roanoke, VA, the daughter of Edmond and Myra (Lockett) Thierry. She grew up in Virginia, attending William Byrd High School in Vinton, VA, and later graduating Radford College with the Class of 1945. After graduation she taught school for a brief period.

She married Cornelius R. ("Bud") Lyle on September 28, 1946, and they moved to the family's cottage on Spofford Lake before settling in Keene. Bud died on January 25, 2009, after they had shared 62 years of marriage.

Gerry, as everyone knew her, was the epitome of what we think of as southern grace and taste. She was always polite, always thinking of how to make others comfortable and of their needs. She had followed her husband in his peripatetic newspaper career up and down the East coast, often driving herself and her son (and various family cats and dogs) from New Hampshire to Virginia or Florida. She often served as a single mom when Bud was away on his journalism duties. She found time to help design and build three family homes, teach the neighborhood children to swim, return to Virginia to nurse her ailing mother and feed the college newspaper staff when Bud brought them home.

She was always looking for the next opportunity to help, whether as interim postmaster in Jaffrey Center, filling in for a couple of semesters to teach Freshman English at Keene State College, or serving as a director of the Visiting Nurses Association in Peterborough.

As a dedicated and loving wife she nursed Bud through over 10 years of dementia.

Always an adventurous traveler she particularly enjoyed ocean cruising. Her final cruise being to Bermuda (a place she loved and had visited several times) with her son and daughter-in-law and her dear friend, Helen Hilderman. She was also an avid card player enjoying Bridge, Canasta and Rook. Gerry was often seen at River Mead walking her beloved poodle, Josie (who was popular with everyone).

She was a longtime member of the First Church of Jaffrey where she taught Sunday School.

A Memorial service will be held on Friday, March 29th at 11:00 am at the First Church of Jaffrey, 14 Laban Ainsworth Way, Jaffrey, NH 03452. Burial will take place in the spring at the family lot at the Spofford Village Cemetery in Spofford, NH.

In lieu of flowers, memorial donations may be made, in Geraldine T. Lyle's name to your chosen charity.

To order memorial trees or send flowers to the family in memory of Geraldine T Lyle, please visit our flower store.