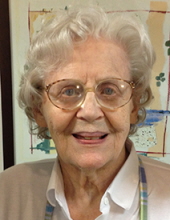 Harriet Kruse Sorensen, 99, of Rivermead, Peterborough, NH died January 26 while lovingly attended and embraced by her daughter and grandson. She was well cared for by the Rivermead staff as well.

Mrs. Sorensen was born in 1919 in Tyler, Minnesota to Sigurd and Sigrid (Linnet) Kruse. She grew up on a large dairy farm with her parents and 6 siblings. The town of Tyler was inhabited by nearly all Danish immigrants, and the primary language used by Harriet and others in the town was Danish. Although born in this country, she did not start speaking English until she was 12. She attended Danish elementary school, Børneskole, and graduated from the Tyler High School.

In 1955, they moved from Minnesota to Norwalk and then Wilton, Connecticut with their four children. Mrs. Sorensen was devoted to the care of her family and children. She also faithfully served as a volunteer for 25 years at the Norwalk, CT Hospital.

Six grandchildren and 2 great-children were a great joy to her. The grandchildren are Soren Wills (Hancock, NH), Phillip Sorensen (Jerusalem, Israel), Katy Sorensen (Holliston, MA), Amy Sorensen Sharvit (Jerusalem, Israel), Tyler Wills (Marblehead, MA) and Scott Sorensen (Colchester, CT). The great-grandchildren, Netanel and Ben Sharvit, live in Israel. The grandchildren especially enjoyed being all together staying 3 or 4 days each summer with their grandparents (and parents) for “swim camp”. Mrs. Sorensen planned many special activities for all of them and provided lots of healthy and appetizing meals. The Sorensens also enjoyed many good times skiing, hiking and swimming with family and friends at their vacation home “Birkehus” in Rockingham, Vermont.

In 1996, Mrs. Sorensen and her husband moved to Rivermead, a full-service lifetime retirement community in Peterborough, NH where they were residents since the first opening of the community. They found the life there very fulfilling and meaningful as they moved through the stages of independent living to assisted living, memory care and nursing care. The staff at Rivermead often commented on how positive Mrs. Sorensen was in her outlook no matter what her physical or medical challenges. She in turn had high praise for all of those from Rivermead who helped her.

Mrs. Sorensen was predeceased by her husband, Robert H. Sorensen and a son, Mark Sorensen. She had 6 siblings who all pre-deceased her. Survivors include her daughter, Anitra Sorensen (Hancock, NH) and two sons, Scott Sorensen (Las Vegas, NV) and Lyle Sorensen (Norfolk, MA). She also has 6 grandchildren, and 2 great-grandchildren (listed above).

In lieu of flowers, memorial donations may be made in Harriet Sorensen’s name to Rivemead Community Fund, 150 Rivermead Road, Peterborough, NH 0348.

To order memorial trees or send flowers to the family in memory of Harriet Kruse Sorensen, please visit our flower store.