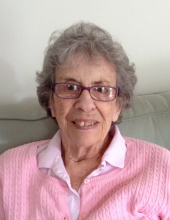 Helen was the daughter of Charles Breed Gilbert and Helen Lee Gilbert and was born in New London, Connecticut on August 8, 1923. Helen attended local elementary schools in Norwich, CT and was a 1941 graduate of The Norwich Free Academy. She spent one year at The Knox School in Cooperstown, NY before attending and graduating in 1946 from Bryn Mawr College with a bachelor’s degree in sociology and a minor in history.

In 1946, Helen married Dr. Clifford E. Wilson, Jr. and they raised four children together. Even though Helen taught elementary school in Baltimore, MD while Clifford was attending medical school, her true passion was art. At 42 years of age, Helen took classes from several local artists in the Mystic area including S. Jerome Hoxie (oils), Lou Bonemarte (watercolors) Foster Caddell (oils and pastels), Al Brouillette (watercolors), Charles Gruppe (acrylics) and her innate talent emerged. She also attended four years of workshops in South Carolina studying with Betts, Brommer, and Carol Barnes. She became quite accomplished, not only in oils and acrylics, but particularly in pastels.

Helen’s landscapes and seascapes were displayed frequently at The Slater Museum, Norwich, CT, Pratt /Wright Gallery in Noank, CT, the Rose Farm Gallery in East Haddam, CT, the Church Street Gallery, Keene, NH, the Peterborough Art Gallery, Peterborough, NH, the Sharon Arts Gallery, Peterborough, NH, the Jaffrey Civic Center, Jaffrey, NH, the Old Lyme Gallery, Old Lyme, CT as well as the Mystic Art Association, Mystic, CT. Later, after moving to Jaffrey, NH with her second husband Howard Schink, Helen taught at the Sharon Arts Center and the Jaffrey Civic Center and displayed her work in many shows there. Represented in private collections all over the United States and Europe, Helen devoted a great deal of her time to teaching others her technique in her home studios in Waterford, CT and Jaffrey, NH.
Helen was a prominent contributor to each community in which she lived; she was president of the Women’s Auxiliary of William Backus Hospital, The Wednesday Book Club, the D.A.R., the Norwichtown Historical Society, the Norwich Garden Club, the United Workers of Norwich, and Cub Scout Den Mother Pack 12. Helen also held membership at the Sharon Arts Center, the Jaffrey Civic Center, the Pastel Society of New Hampshire, the Connecticut Watercolor Society, the Mystic Art Association, the Lyme Art Association, the Essex Art Association, Connecticut Women Artists, and the Pastel Society of Connecticut.

Helen was the subject of an article by Earl Killeen on acrylics in the April issue of Artist’s Magazine and also had her work critiqued in Acrylic Painting Techniques by Earl Killeen (North Light Books). She won numerous monetary prizes including The Grumbacher Gold Medal.
When Helen loses herself in her art, she is usually being inventive and intuitive and employing various techniques to convey the beauty of natural settings through impressionistic imagery. She said, “You can read a book or listen to music, but to work with your hands takes you out of yourself. You become you.” Helen especially enjoyed the challenge of capturing the movement of the ocean because the effect is powerful. “You feel you’re right there.” Helen believed that painting is a new way of seeing the world about her and to be able to put her feelings on canvas via the brush is a continuous process of experimentation and delight. As an “expressionist”, her soul is bared, her emotions given free reign with color, and oil /acrylics is her medium. Her technique varied with the mood or subject from thin and blended or glazed oils /acrylics to the textured thickness obtained with the palette knife. Helen once said, “I live and love to paint.”

Helen was a wonderful mother, who taught her children music, the joy of books, to swim, and to enjoy life and nature. She had a witty sense of humor and loved a good laugh.
Helen was a devoted member of The First Church in Jaffrey and was a Deacon for many years. She annually donated several paintings to the Art Venue at The First Church Annual Fair in August.

There will be a private service and burial at a later date. Helen’s family expresses heartfelt thanks to all the nurses and staff at RiverMead Special Care Unit for the solicitous care given to their mother. Donations in Helen’s name may be made to The First Church in Jaffrey, P.O. Box 673, Jaffrey, NH 03452 or to the Jaffrey Civic Center, Main Street, Jaffrey, NH 03452.

To order memorial trees or send flowers to the family in memory of Helen L. Schink, please visit our flower store.