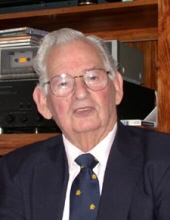 Herbert W. “Bill” Gannon, 92, of Fitzwilliam, died peacefully at his home on Friday, March 27, 2015 after a period of failing health.

He was born in Manchester, England on May 12, 1922, son of the late Herbert and Amy (Haslem) Gannon. He received his education in England and served honorably in the Royal British Marines during World War II. In 1948, he immigrated to the United States and settled in Somerville, Massachusetts.

Bill became the Head Porter with the Freshman Union at Harvard University, a position he enjoyed for 38 years. Bill was also the sexton at Christ Church in Cambridge, MA, until he and his wife, Marilyn (Zimmerman) Gannon moved to Fitzwilliam, NH in 1990.

Bill spent his retirement years doing what he loved—caring for his dogs, reading, gardening, fishing, traveling, collecting model trains and spoiling wood with his different handcrafts. He will be missed by his children, their families and his extended family.

At Bill’s request, there will be no calling hours and all services will be private and at the convenience of the family.

Memorial contributions may be made to Hospice at HCS, PO Box 496, Peterborough, NH 03458.

To order memorial trees or send flowers to the family in memory of Herbert W. 'Bill' Gannon, please visit our flower store.