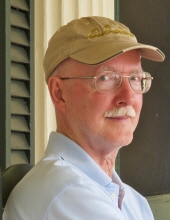 James or “Jim,” as he was always known, was born in Chester PA, the only child of R. Glen and Genevieve Thomas. As a young boy, Jim evinced what would be his longtime consuming interest in science and mathematics and “how things worked.” In his college years at the University of Delaware and later at Washington University, he broadened his interests to include “the big questions,” and ultimately graduated with a PhD in Philosophy for his work on the mathematical origins of symbolic logic.

After college, Jim moved with his wife, Patsy and his young children, Stefan and Lisa, to Albany, NY where he taught courses in Science and Logic at SUNY Albany. Not surprisingly, the burgeoning field of computers attracted Jim, and after taking an additional degree in this area, Jim moved across town to teach Computer Science at Sienna College. But the computer industry beckoned, and in 1987 Jim moved with his second wife, Sydney, to New Hampshire, to begin his new career as a software engineer. Jim’s versatility in mastering disparate areas in his new field enabled him to make significant contributions to the computer firms for which he worked. He retired in 2001.

Retirement brought some of the best years of Jim’s life. He loved the Monadnock area in which he and Sydney had settled and spent many happy hours exploring the woods and mountain trails the area offered. His memories of hunting with his father during his Pennsylvania childhood led to a renewed passion for the sport. Ultimately, though, he turned his attention elsewhere. Sydney had begun to paint seriously, and Jim decided that her paintings should be expertly photographed. With characteristic intensity, Jim made himself into an expert photographer of paintings, matching the colors of his photographs to the colors of a painting with matchless precision. Area artists sought him out to photograph their work for their websites and portfolios. But paintings were not Jim’s only subjects: he and Sydney traveled often to Maine, and to Europe, Africa, and the American West and South, and Jim produced photographs of vistas in all, as well as in his much-loved southern New Hampshire.

While Jim was never “joiner,” he cared deeply for his NH hometown of Temple, and actively supported local efforts, in particular the Temple Town Hall renovation project. He said “Goodbye” to Temple only reluctantly after his health declined.

All are invited to join the family at Jim's Memorial Service, which will be held on Saturday, April 30, 2022, at 11:00 AM in the Congregational Church of Temple, 17 Main Street, Temple, NH 03084. Rev. Brent Charles will officiate.

To order memorial trees or send flowers to the family in memory of James Alwin Thomas, please visit our flower store.