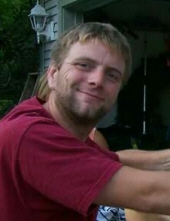 Jason was born in Peterborough and through his life he had also lived in the neighboring towns of Jaffrey, Rindge and Dublin. He was born on December 14, 1981, the son of Philip Bourgoine and Susan (Chamberlain) Cauthorn. Jason was later adopted and raised by James Eddy and his mom in Jaffrey. He had attended Conant High School in Jaffrey.

Jason had many skills and had enjoyed working with Gauthier Auto Service and Cliff’s Auto Body in Jaffrey. He had also worked briefly with J & J Auto Body, American Steel and Coll’s Concrete. Jason is fondly remembered for being a good son, dad and husband. He always enjoyed bringing his son along on towing trips and fishing with his daughter. He had married Colleen Ouellette on August 20, 2011. He also enjoyed spending time on his motorcycle and helping Steven Gauthier on his racing team.

Jason is survived by his parents, Philip, Bourgoine, James Eddy, and Susan and her husband Bryan Cauthorn, In addition to his parents, Jason is survived by his wife Colleen, his daughter Kallie, and his son Austin, all of Peterborough; his sisters Tanya Eddy and Mackenzie Cauthorn, both of Tappahannock, VA; his brothers, Bryan ‘Buddy’ Eddy of Jaffrey, Joshua Eddy and Tyler Cauthorn, both of Tappahannock, VA, Alex Bourgoine, Connor Bourgoine, Hunter Bourgoine and Cameron Bourgoine, all of Peterborough, and many nieces, nephews, cousins and close friends.

A celebration of Jason’s life will begin at the funeral home at 2:30pm and will conclude with a graveside service at Pine Hill Cemetery in Peterborough.

To order memorial trees or send flowers to the family in memory of Jason M. Eddy, please visit our flower store.