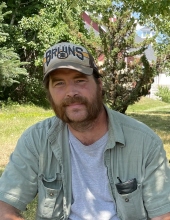 Jeremiah E. Fisher, 42, of Swanzey, NH, passed away unexpectedly on August 20, 2022, at the Dartmouth Hitchcock Medical Center in Lebanon, NH.

He was born in Bellows Falls, VT, a son to Edward C. Fisher and Ann Marie Riendeau on December 15, 1979.

Jeremiah grew up in New Hampshire and attended Keene Middle and High School where he made many fond memories including his time competing on the wrestling teams. He spent about twenty years in the construction industry as a roofer. He worked for Guyer and Sons before becoming the owner of Fisher Roofing Co. out of Chesire county for two years.

On January 21, 2018, Jeremiah married the love of his life, Kerry Ann Boucher in Spofford, NH, all thanks to his well-practiced Irish brogue. He was a proud Irishman who could often be found sporting his kilt.

Jeremiah’s hobbies included hiking, fishing, biking, shooting, campfires and most importantly, loving Kerry Ann, his own ‘personal princess’. He prioritized taking care of his family and making time for anyone in need. He was a jack of all trades helping anyone solve any dilemma they were facing. Jeremiah was a lover of family.

He was predeceased by five beautiful babies whom he rejoins in heaven.

To order memorial trees or send flowers to the family in memory of Jeremiah Edward Fisher, please visit our flower store.