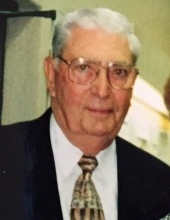 He was born in Boston, MA on March 28, 1921. He was the son of the late Frank and Regina (O’Gara) Burk. He was educated at Boston English High School and Northeastern University.

He was a veteran of the US Army during World War II. He served honorably from 1943 to 1946 in the European Theatre.

Mr. Burk was an industrial engineer. After the war, he joined the Meisel Press Manufacturing Company and later became the Plant Manager of the G.K. Hall Publishing Company in Boston, MA. In 1963 he moved to Nashua, NH with his family to join Nashua Corp. He became the Manufacturing Superintendent of the Toner Division and retired in 1983.

John was an avid golfer and enjoyed his summers at Bear Island on Lake Winnipesaukee.

There will be no calling hours.

A Mass of Christian Burial will be celebrated on Friday, April 28, 2017 at 2:00 PM in St. Margaret Mary Church, 33 Arch Street, Keene. Rev. Msgr. Daniel O. Lamothe will be the celebrant.

In lieu of flowers, and in appreciation for the care and support given to Mr. Burk and his family, please consider making a memorial contribution to Hospice at HCS, PO Box 564, Keene, NH 03431

To order memorial trees or send flowers to the family in memory of John G. Burk, Sr., please visit our flower store.