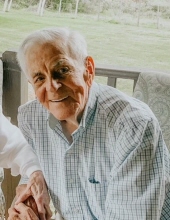 Joseph Louis DesRochers born March 9, 1931, to parents Alma C LaFrance and Louis J DesRochers, passed peacefully in his home, on December 11, 2022, at the age of 91, with family by his side.

Joe is survived by his loyal, loving, and devoted wife, Diane (O’Neill) DesRochers of Rindge NH.

He is also survived by a sister Terry Jacobs of MA, as well as many nieces and nephews.

Joe served in the United States Navy in the Korean War. He began his career in the Navy at the Yankee division in Hudson MA, a heavy mortar company. He participated in the summer camp at Camp Edwards on Cape Cod. There he earned his qualifications for M1-Carbine, 30 and 50 caliber machine guns and became an expert with 45 pistols. From there he went to Teleman school in Norfolk VA, graduated and then was stationed at Comm 5, also in Norfolk, there he became an expert in communications. Joe was involved in Cryptography and then Cryptanalysis. Joe deployed to sea on the aircraft carrier, USS Randolph. He used his expertise to establish a new communications center. He was an incredible trainer and trained other sailors in communications. He also deployed on many trips to the Caribbean and South America. Joe was honorably discharged from the US Navy on June 15, 1954.

Joe and Diane spent many years living in MA, NH, and Florida. They moved back to NH from FL, two years ago to be closer to family. Many people in our local NH community would see him with his Navy Veteran hat on and anonymously pay for their meal when they saw them eating out together. Our family is deeply touched by so many of you.

After the Navy Joe worked in finance and spent several years working for Hanover Insurance Co, in the finance department.

Besides his deep patriotism, Joe loved sports and played ice hockey competitively. Later in life he loved to take walks outside, play golf and play tennis, he even rollerblade into his 70’s. He was quite an athlete and enjoyed these parts of his life.

Joe had one of the best smiles the world had to offer, the smile was equipped with his famous dimples (which some of his family also got) and his beautiful blue eyes that would shine bright when he was happy. He also had a great sense of humor and was always making us laugh. This is what we will miss the most.

There will be a memorial service in his honor on January 7th, 2023, at Jaffrey Bible Church, 133 Turnpike Road Jaffrey, NH 03452 at 2:00 PM, and a private military burial for his family at a later date.

To order memorial trees or send flowers to the family in memory of Joseph Louis DesRochers, please visit our flower store.