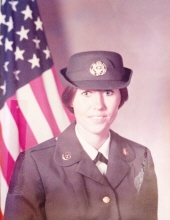 Kathleen Teixeira, 63, of Rindge, NH, died peacefully on Tuesday, February 12, 2019 with her family by her side at St. Teresa Rehabilitation Center in Manchester after a long challenge with Alzheimer's.

Mrs. Teixeira was born on May 29, 1955 in Peterborough, NH, the daughter of Norman H. and Lucille (Ford) Russell. She had graduated from Monrovia (CA) High School in 1973 and Enlisted in the U.S. Army. Mrs. Teixeira was very proud to have earned the rank of Sergeant and had served in Virginia and Texas before her term ended in 1978. She had also met and married her husband, Manuel Teixeira in Killeen, Texas. Together, they moved home to New Hampshire and settled in Rindge.

She had retired in 2008 after enjoying being a consultant for Mary Kay Cosmetics, and after working as a manager at the former Ames department store in Peterborough many years prior. Mrs. Teixeira is a member of the Mayflower Society, former girl scout and had enjoyed woodworking, listening to music of the 60s, craft fairs and playing piano in her free time.

In addition to her parents who live in Ocala, FL, Mrs. Teixeira is survived by her loving and devoted husband of 42 years, Manuel of Rindge, NH; her 3 sons, Brian Teixeira and his wife Jessica of New Ipswich, NH, Adam Teixeira and his wife Alexia of Derry, NH and William Teixeira and his girlfriend Kim Fergusen of Nashua, NH; 10 grandchildren; her 2 sisters, Ann Johnston of San Carlos, CA and Debby Russell of Orlando, FL and many nieces, nephews, cousins and close friends.

Abiding by her wishes, there will be no calling hours or services at this time. A graveside service with full Military Honors will be conducted in the spring at Hillside Cemetery in Rindge.

In lieu of flowers, memorial contributions are respectfully requested to be made in Mrs. Teixeira’s name to Catholic Charities of New Hampshire, 215 Myrtle Street, Manchester, NH 03104-4354 .

To order memorial trees or send flowers to the family in memory of Kathleen Teixeira, please visit our flower store.