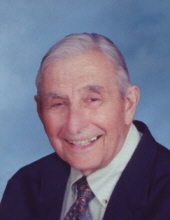 Leon J. Peragallo, 94, passed peacefully into the presence of Jesus, in the company of his family on Wednesday, August 28, 2019 at the Jaffrey Rehabilitation and Nursing Center Jaffrey, NH.

Leon was born prematurely October 11, 1924 at his family’s apple farm in the close-knit Italian community of Matson Hill, Glastonbury, CT. The son of immigrants, he understood the value of hard work but also enjoying life and being part of a close, loving family.

He felt strongly about serving in the Second World War and enlisted in the U.S. Army Air Corps at Fort Devens, MA in 1942, following graduation from Glastonbury High School. He was deployed to Framlingham, England as a Ball Turret Gunner in a B-17 bomber (flying fortress). On their 16th combat mission over Europe, the ship was shot down and crash-landed in the North Sea, August 2, 1943. Leon was then taken prisoner by a German patrol and sent to several POW camps but eventually Stalag Luft IV in Poland. He subsequently survived an infamous forced 500-mile, 52-day march back to Germany despite starvation and a chronic leg wound. He was awarded the Purple Heart, the Air Medal and an Oak-leaf Cluster.

Leon returned home to his beloved Matson Hill where he fell in love with Frances "Franny" Canapari. They married and went on to spend 70 years together, raising three children. Leon left the farm and became a printer at Finlay Brothers Printers of Hartford, CT, where he rose from maintenance to Vice President. He finished his career as a self-employed printer and owner of Colonial Printers of Glastonbury, CT.

Our Dad, grandfather (“Nonno”) and great grandfather (“Big Nonno”) will be greatly missed but we will never forget the important the gifts he left us, especially: “The honor system” and “Don’t Quit!, his reliance on his Lord and Savior Jesus Christ, the twinkle in his eye, and the way that he made each one of us feel beloved. He was our hero.

Visiting hours will be held at 5:00 PM and memorial services at 6:00 PM, on September 4, 2019 at the Monadnock Bible Baptist Church, 210 South Woodbound Road in Rindge, NH where Leon was a member.

A special outdoor service will be held on September 6, 2019, at 11:00 AM at the St. Augustine Cemetery on Hopewell Road in South Glastonbury, CT. The service will be followed by a reception and visiting at the Gallery Restaurant, 141 New London Turnpike from 12:00 to 3:00 PM.

To order memorial trees or send flowers to the family in memory of Leon J. Peragallo, please visit our flower store.