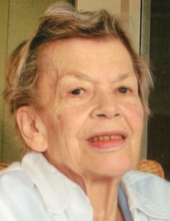 Margaret (Halsted) Tenney, 84, resident of Peterborough, NH died at Rivermead Nursing Home in Peterborough on February 21, 2019 after a period of declining health.

She was born on August 8, 1934 in Plainfield, NJ a daughter of the late Osborne and Katherine (Patterson) Halsted.

Peggy had a kind nature and an easy laugh that warmed all she met. She was nourished by life’s simple pleasures, like raising golden retrievers and building kites for her friends.

Peggy began her education in a one-room school in Pawlet, VT. She attended Miss Hall’s college preparatory and graduated high school in 1952 from Burr and Burton Academy in Manchester,VT. In 1956, Peggy graduated from Smith College in Northampton, MA.

Peggy married David Harwood in 1958; together they had two sons. Peggy worked as a resource specialist for children in several schools. Facilitating “ah-ha moments” within her students was her greatest professional reward.

In 1982, Peggy married Thorvald (aka, Skip) Tenney. Peggy and Skip shared a profound love for each other and the rural lifestyle they led in New Hampshire and Vermont.

Peggy is preceded in death by her brother, Bayard Halsted. She is survived by her beloved husband of 37 years, Skip Tenney; her sons, Smitty and Ned Harwood; her brother, David Halsted; and four grandchildren, Ursula, Amanda, Lance and Tyler.

SERVICES: In accordance with her wishes there will be no formal services held. Following cremation, she will be buried in Vermont on the family farm.

In lieu of flowers donations can be made in her memory to Crotched Mtn. Rehab, 1 Verney Drive, Greenfield, NH 03047.

To order memorial trees or send flowers to the family in memory of Margaret Tenney, please visit our flower store.