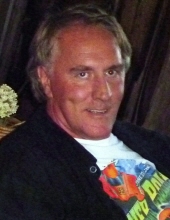 Mark Daniel Johnson of Jaffrey died of cancer Friday, Jun. 5th, 2015 in his home surrounded by his loving family. He was 55.

Mark was born Jan. 14, 1960 in Washington DC, the son of Daniel and Jacqueline (French) Johnson. He attended Deerfield Academy and Dublin School and held a Bachelor of Science degree from combined studies at UNH and Franklin Pierce College. He served in the U.S. Air Force in Plattsburg, N.Y. and was honorably discharged. Prior to being diagnosed with brain cancer, he was employed by Fairpoint Communications.In 1998, he married his best friend and love, Ramona (Martineau) Johnson. They had one child, an adoring daughter, Amelia, born in 2003.

Mark was an avid motor sport enthusiast. He raced stock motorcycles and moved on to racing Formula One powerboats, the highest class of inshore powerboat racing in the world.

In addition to wife, Ramona, daughter Amelia, his parents, Daniel and Jacqueline Johnson of Jaffrey, Mark is survived by his brother, Douglas Johnson of Jaffrey, sister, Melinda Johnson and Andrew White of Fitzwilliam, in-laws Richard and Roberta (Davis) Martineau, sister-in-law Nicole (Martineau) Conroy and husband, Frank and their two daughters, Brynn and Paige, all of Surry, N.H., brother-in-law Andre' Martineau and wife, Lori and their daughter, Narra, all of Roxbury.

Flowers are welcomed and/or memorial donations can be made to the Jaffrey Gilmore Foundation Trust, P.O. Box 486, Jaffrey, N.H. 03452. A celebration of his life will be held at the convenience of his family.

To order memorial trees or send flowers to the family in memory of Mark Daniel Johnson, please visit our flower store.