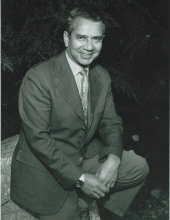 COL (R) Richard Grodin, 95, departed this world January 29, 2015, in the lull between two major storms. There were many facets to Dick Grodin, as he was an athlete, scholar, teacher, mentor, a Colonel, a State Representative, a father, and Grampa. In all cases, he led his life on his own terms.

Richard Adrian Grodin was born in Cleveland, Ohio, on February 25, 1919, to Benjamin Robert Grodin and Belle Spiegle Grodin. He entered the US Army as a private in 1942, was commissioned in 1943 and attended the School for Special Service in 1943 where he met Edith Moreland Lewis. After marrying Edith in January 1944, he completed Military Intelligence training in 1944 prior to deploying to the Pacific Theater in World War II, serving in the Signal Intelligence Service 1944-1946.

After he left active duty, he and Edith moved to South Lyndeborough where he assumed the position of Headmaster, Amherst High School (1946-1948). From there he became the principal of West Bridgewater High School, MA (1948-51).

He was recalled to active duty in 1951, served in the National Security Agency (NSA) (1951-52), was an Intelligence Officer in East Africa, and was promoted to Major. He continued his duties with the NSA as a Planner, Head of Technical Staff, and Assistant Division Chief (1954-58). He was the Operations Officer (NSA-Pacific) from 1958-61. Upon his return to the States, he became Chief, Combat Developments Branch, ACS, Army Security Agency (ASA) (1961-66), was promoted to Lieutenant Colonel in 1961.

His next assignment took him to the Canal Zone where he was Commander US Army ASA, Southern Command (1966-67). He was then promoted to Colonel, and then assigned as Commander US 509th RR Group, Vietnam (1968-69). Upon his return to New England, he retired (1969).

Upon his retirement, he moved to Jaffrey, NH (1970), then assumed the role of Head of the English Department at Conval Regional High School (1970-75), and retired from that position in 1975, but he delighted in tutoring students for a number of years afterwards. He spent a dozen years as State Representative from Jaffrey, including Chairman, and Municipal and County Committee of the NH House.

He loved the Town of Jaffrey, spending 25+ years with the Jaffrey Planning Board, notably as Chairman and Secretary. Dick and Edith were charter members of the Jaffrey Chamber since its inception in 1982. Dick served as a Director from 1992-1994, then became the Secretary from 1995-2007. In 1996 Dick and Edith were given the Citizen of the Year Award by the Chamber.
His academic credentials included undergraduate work at Case-Western Reserve, Advanced Graduate Study (Boston University, Harvard University), Environmental Planning (Antioch, New England), and Environmental Law (University of New Hampshire).

The Grodin Family would like to thank the following organizations for their love and overwhelming support: Jaffrey-Rindge Memorial Ambulance and the Jaffrey Chamber of Commerce. In lieu of flowers, we request donations be made in Dick’s name to the Jaffrey-Rindge Memorial Ambulance Fund (P.O. Box 107, Jaffrey, NH 03452) and The Park Street Theatre (P.O. Box 278, Jaffrey, NH 03452) — both non-profit organizations.

Service: In accordance with his wishes, there will be no memorial service or funeral. His family will hold a public Celebration of His Life at a later date.

To order memorial trees or send flowers to the family in memory of Richard A Grodin, please visit our flower store.