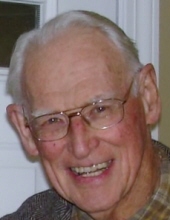 The Reverend Richard Baldwin Hardy, died at age 96 on November 9, 2015 surrounded by his loving family at Rivermead in Peterborough, NH. He was born in Attleboro, MA, on October 2, 1919. His parents were W. Lawrence and Edith (Baldwin) Hardy both of Jaffrey, NH. He attended Attleboro public schools and graduated from Boston University in 1941. He received a Baccalaureate in Theology from Princeton in 1944, and was awarded a scholarship to attend Andover Newton Theological Seminary where he received a Masters in Sacred Theology. He was ordained on April 3, 1944. He married Helen I. Broadbent in 1943, his devoted and loving wife for 70 years. Helen preceded him in death at age 95 in April of 2013. He served as the pastor of six churches in New England and Ohio from 1942 to 1984, when he and his wife Helen retired to Harrisville, NH. He was known and loved for his pastoral care, his practical and thought-provoking sermons, and leadership in the American Baptist denomination. He served in several local communities as an interim minister during his retirement. At Rivermead, he was an active participant in the music and wellness programs, and a loving friend of many people and always a “chaplain” at heart. Rev. Hardy was the loving father of four children, seven grandchildren, and five great grandchildren to whom he passed on his belief that ministry and service to others was of the highest importance along with love of family. He also imparted to his children and grandchildren his extraordinary love for classical music, a love of the outdoors receiving the Silver Lake Land Trust Stewardship Award just this past summer, and a passion for the Red Sox and Patriots. Every holiday was an opportunity for a big family gathering and telling stories. His devotion to his wife, Helen, for over 70 years of marriage led him to remark often that they grew closer together as they grew older together. He is survived by his loving children, Paul M. Hardy, M.D. and his wife Ellie Hardy of Dublin; daughter Betsy Perry and husband Russ White of Harrisville; daughter Priscilla Hardy of Harrisville; daughter Ruth Jacobson-Hardy and husband Michael Jacobson-Hardy of Florence, MA; 7 grandchildren, Matthew Perry and partner Betsey Finn of Sausalito, CA; Seth M. Hardy, M.D. and his wife Shelby Hardy of Hallowell, ME; Sarah Hurley and her husband Bryan of Hingham, MA; Rebecca Perry-Hill and her husband Skyler Hill of Asheville, NC; Hannah Jacobson-Hardy of Montague, MA; and Leah Jacobson-Hardy of Lenox, MA; 5 great grandchildren: Sawyer, Libby and Rosemary Hurley; Emerson and Oscar Hardy; nephew David A. Hardy and wife Bobbi Fried of S. Easton, MA, and daughter Aimee Fried-Hardy of Syracuse, NY, and son, Jagger Hardy, of Orlando, FL. His brother, Lawrence Hardy; his grandson, P. Nathaniel Hardy; and his nephew, Rev. Ronald Hardy preceded him in death. A celebration of his life will be held at 2:00 P.M., at the Nelson Congregational Church, 830 Nelson Road, Nelson, NH. Friends and family are invited to call on Friday from 4:00 to 6:00 PM at the Cournoyer Funeral Home, 33 River Street, Jaffrey, NH 03452. In lieu of flowers, donations may be made to the Community of Angels Fund through the Nelson Congregational Church, the Mission Fund of the First Baptist Church of Keene, NH, or the Hundred Nights Shelter of Keene, NH. http://thetributecenter.com/tributeplayer/default.aspx?webcasteventid=18486#/webcast
To order memorial trees or send flowers to the family in memory of Richard Baldwin Hardy, please visit our flower store.