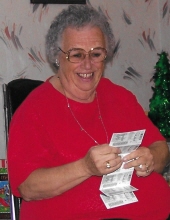 Rita M. Archambault, 89, a native of Jaffrey, NH, died peacefully at Carlyle Place Assisted Living in Bedford, NH, on November 11, 2020 with her daughter by her side, after a lengthy illness.

She was born in Jaffrey on October 8, 1931, daughter of the late John and Rebecca (St. Pierre) Robichaud. She was raised in Jaffrey and graduated from Conant High School with the Class of 1949.

Rita married Robert James “Pete” Archambault on October 4, 1952, and together they raised their family in Jaffrey. Rita adored spending time with her family; they enjoyed Jaffrey Ice Racing and was a score keeper at Pete's softball games. Additionally, she enjoyed skeet and target shooting with her family.

As a teenager, Rita babysat and worked at the local laundromat. She volunteered with the Jaffrey Ambulance during the 1970's and 80’s. Rita also worked in the Jaffrey Mill for several years, before going to work for Millipore for 23 years until she retired. Following retirement, she volunteered as a driver for the Red Cross for 12 years.

Rita was an active member of many local organizations: Jaffrey Women's Bowling League, Jaffrey Cribbage Club, Masons of Winchendon, Millipore Retirees Lunch Bunch, Golden Ages of Winchendon, and a member of the Jaffrey Seniors. She was also a proud lifelong blood donor.

Throughout her life, Rita had many interests: she loved to read, and always had a book in her hand. She liked boating and fishing, playing bingo, playing the slot machines, scratch lotto, card games, and doing latch hook and puzzles. Rita was a loyal Red Sox fan and watched every game. She loved going out to eat and traveling, taking many cruises and bus trips during her life. ln later years, Rita traveled every Thanksgiving to Florida to visit her sister.

In addition to her parents, Rita was predeceased by her husband, Pete, who died May 16, 1992.

She is survived by her daughters, Laurie Murray and husband James, of Bedford, NH; and Donna Cormier, of Jaffrey, NH; her sister, Cecile Giguere of Keene, NH; her extended family and many friends.

Family and friends are invited to calling hours, which will be held on Monday, November 16, 2020 from 2:00 PM to 4:00 PM at the Cournoyer Funeral Home, 33 River Street, Jaffrey.

A Graveside Service will be held on Tuesday November 17, 2020 at 11:00 AM in St. Patrick Cemetery on Hillcrest Road in Jaffrey. Rev. Wilfred Deschamps will be the Celebrant.

Attendees at either event are respectfully reminded that social distancing will be observed and face masks required.

To order memorial trees or send flowers to the family in memory of Rita M. Archambault, please visit our flower store.