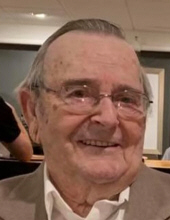 Robert Joseph Taylor of Rindge, NH passed away peacefully at his home on August 29, 2022, surrounded by his beloved family. He was 92 years old.

‘Bob’ was the first-born child to his father Robert D. Taylor and Eleanor (Valliere) Taylor. He lived with his biological mother until the age of three, when Bob and his sister Dorothy went to live with their father and their stepmother Lena (Thibault) Taylor. His father moved his family from Fitchburg to Malden MA to perfect the art of candy making. Growing up during the depression, money was tight in the Taylor household and Bob contributed to the family income by shining shoes in Malden Square, and then had to leave school after completing 9th grade at Beebe Jr. Highschool to work as an Office Boy at the Malden Gas Company. They made another move to Lawrence, MA before finally settling in Rindge, NH where they opened Robert Taylor Candies. Bob worked alongside his father as a candy maker and was instrumental in helping to build the business and learn the art of candy making.

Bob enlisted in the US Army in March of 1950 and ventured out of New Hampshire to Germany as part of the post-World War II, US Constabulary Law Enforcement Occupation. Bob was part of the 6th Armored Cavalry Regiment, where he earned the rank of Sargent, and was a tank commander of a M26 Pershing Tank. He was so proud of his service to his country. Bob was honorably discharged in 1954 at Fort Bliss, Texas, and headed home to Rindge to again assist his father in the candy business.

Bob met and married Beryl (Cleveland) Taylor, the love of his life, when he came back to Rindge after his discharge from the Army. They married in 1959. Soon after their marriage the young couple moved back to Malden, MA and Bob accepted a position as Serviceman at Mystic Valley Gas Company. He provided a wonderful home for his two children, son Ty and daughter Nancy on Tremont Street in Malden. Bob worked for Boston Gas for 35 years and retired in 1991 at the young age of 60. They would say goodbye to Malden and relocated to their forever home back in Rindge on Pool Pond. Bob hand built their home and where he would reside until his death. ¬

Bob was a true success story. Self-motivated and a curious learner. He loved building and repairing radios and clocks, repaired his own vehicles, and was an incredibly gifted candy maker. Known as “Tada” to his grandchildren, Bob was a loving grandfather to all his grandchildren and great-grandchildren. Bob was a huge Red Sox fan, loved the Bruins, Patriots and NASCAR.

A private graveside service with full military honors was held earlier at Hillside Cemetery in Rindge.

To order memorial trees or send flowers to the family in memory of Robert J. Taylor, please visit our flower store.