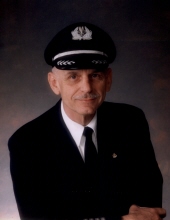 Ron graduated from the University of Maine in Orono with a degree in Civil Engineering. During those years he embarked on his dream of flying by becoming a pilot in the Maine Air National Guard. He completed his training as a fighter pilot at Larson Air Force Base in Moses Lake, Washington, and Craig Air Force Base in Selma, Alabama. As a Korean War Air Force veteran, he continued to pursue his passion by flying commercial jets for American Airlines. He earned the rank of Captain in 1978 and retired in 1997. Ron also founded Atlantic Air, a Connecticut commuter airline now known as Business Express.

Upon retirement, Ron spent years pursuing his flight-related hobby, bird watching as well as exploring the country in his motor home. A patriotic American, Ron loved talking politics and defending his conservative position for his beloved country. He was an avid reader of history, the sciences, mathematics and everything about the natural world. He had an innate thirst for lifelong learning and enjoyed sharing his wealth of knowledge with his children and grandchildren.

Ron’s family and friends affirm that he was a man of great integrity and always strove for excellence. Of strong mind, gracious spirit, and generous heart, he was a realist as well as a lover of the arts. Lines from Ron’s poem “Iron Birds,” written to commemorate his retirement from American Airlines, also apply to his last journey: “I’m on final approach now and the runway is in sight / I’ll be landing soon—and my life will be changed forever.” He was a kind father, a loving husband, and a respected brother and friend. He will be missed.

A memorial service will be held at the Cathedral of the Pines in Rindge, NH, on June 6, 2015, at 2 p.m. A private celebration of Ron’s life will also take place on Block Island, RI in July.

To order memorial trees or send flowers to the family in memory of Ronald K. Goodridge, please visit our flower store.