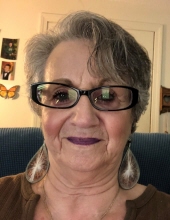 She was born in Jefferson Hills, PA. The daughter of Alfred and Marian Nicolosi. Rose grew up in Pennsylvania and attended Jefferson Davis High School. Later moving to Jacksonville, FL before making New Hampshire her home. She had lived in Jaffrey, NH before spending the last five years in Hinsdale NH.

Rose worked for New Hampshire Ball Bearings of Peterborough as a receptionist for twenty-five years. She loved to spend time with her children, grandchildren and her first great grandson. Over the last ten years you could often find her at California Nails of Keene getting her nails done.

She is survived by her children; Angela R. Caron and her husband Daniel T. Caron of Winchester, NH and Michael G. Tabor and his wife Erin M. Tabor of Rindge, NH, her brother of FL, her four sisters all of Jacksonsville, FL, eight grandchildren, three step grandchildren, one great grandson, her beloved cat baby, many nieces, nephews, cousin and many close friends she considered family.

There will be no services held at this time. A celebration of life will be held at a later date.

To order memorial trees or send flowers to the family in memory of Rose Marie Nicolosi, please visit our flower store.