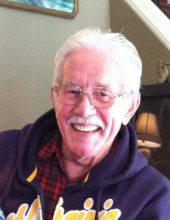 He proudly served in the Army stateside 1953-1955 during the Korean War and always said how he was getting his vaccinations when the armistice was signed.

Sam was a friend to many people. People seemed to warm to him immediately and he made friends wherever he went. His smile made him almost instantly approachable. He also loved his nephews and nieces on both sides of the family and they loved him in return. Dad loved his home state of West Virginia, he tolerated the winters of New Hampshire. He loved nature and would often take his children and grandchildren on a hike up Mount Monadnock. He continued to do that well into his seventies before his knees made the walking intolerable.

He maintained an active life even after retiring from Teleflex. He continued for a few more years part time at DD Bean and at home he always maintained the lawn, the cars, and fed the birds.

Dad loved the Lord. He had several worn out bibles which he read and reread several times. Keeping one on the dashboard of his favorite car. He prayed often and hard and served as an example to his family.

He is loved by his family. He will be missed. We are blessed to have had him in our lives and know that someday we will be reunited.

To order memorial trees or send flowers to the family in memory of Samuel D. Loudin, please visit our flower store.