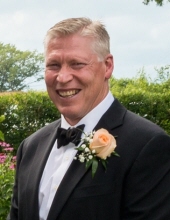 NEW IPSWICH - Steven D. Hakala, 54, of New Ipswich, beloved husband and father, was called to his Savior's side, Apr. 1, 2015. He was born in Peterborough on Aug. 15, 1960, the son of Arthur and Ida (Aho) Hakala. He graduated from Mascenic High School in 1978, and graduated from Merrimack College in 1982 with a B.A. in Business and a minor in accounting. He spent his college years playing NCAA hockey, and after college went on to win the American Hockey League National Championship with the Tulsa Oilers. An entrepreneur at the age of 24 he started his own business, Hakala Foundations, which grew into a successful life-long company for him and his family. Steve was an avid hiker, cyclist and motocross-racing enthusiast. If he wasn't working, he was hiking, or at the races with his most precious family, Gisele, Jake and Abram. Steve's strong faith in God was felt by all who knew him, and he touched many lives with his devotion to Christ. He always saw the good in people, and he truly was a bright light of Christian faith for them. He is survived by his loving wife, Gisele M. (Paradis) Hakala, his son, Jacob S. Hakala and his wife, Jennie, and Abram Hakala; his sisters, Diane Rautio and her husband, Mert, Ginger Heagy and her husband, Barry and Julie Casertano and her husband, Mike; his brothers, Bill Hakala and his wife, Linda, Bob Hakala and his wife, Kathy, Rick Hakala and his wife, Debbie, Jack Hakala and his wife, Helen, Ron Hakala and his wife, Linda, as well as numerous aunts, uncles, cousins, nieces and nephews. Steve was predeceased by his parents, and by his brother Ted. Family and friends are warmly invited to calling hours on Monday, Apr. 6 from 5 p.m. - 8 p.m. in the Jaffrey Bible Church, 133 Turnpike Road (Route 124) Jaffrey. Funeral Services will be held on Tuesday, Apr. 7 in the Jaffrey Bible Church at 10 a.m. Burial will be in the spring at the Smithville Cemetery, New Ipswich. http://thetributecenter.com/TributePlayer/default.aspx?webcasteventid=5403#/webcast
To order memorial trees or send flowers to the family in memory of Steven D. Hakala, please visit our flower store.