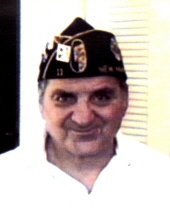 Sully was born in East Boston, MA on August 27, 1931, son of the late Sylvester and Dominica (Gamble) DeRuosi. He had attended schools in Boston, MA and then joined the U.S. Army and served our county honorably through the Korean Conflict.
Sully returned home to Boston and worked for the City of Boston and the Massachusetts General Hospital for many years before moving to Rindge in 1976.

Sully was a lifetime member, Past Commander and past Chief Steward of the John Humiston Post 11 American Legion in Jaffrey. He had also served in many other capacities both at the local level and at the District level with the American Legion.
He was a communicant of Saint Patrick Church in Jaffrey and a faithful member of Our Lady of Monadnock Council #8544 Knights of Columbus

Sully was preceded in death by his wife, Maryann (Janielis) DeRuosi on December 7, 2010. He is survived by his daughter Sharon of Rindge, his son Steven of Hudson, NH, his 3 grandchildren, Tyler, Sebastian, and Isabella DeRuosi; a large extended family and many friends.

At his request, there will be no calling hours.
A memorial service, followed by full military honors will take place on Tuesday, July 9, 2013 at 10:00 AM, at the Massachusetts State Veterans Cemetery, 111 Glenallen Street, Winchendon, MA 01475. Rev. Wilfred Deschamps, Pastor of Saint Patrick Church in Jaffrey will officiate.

To order memorial trees or send flowers to the family in memory of Sylvester "Sully" DeRuosi, please visit our flower store.