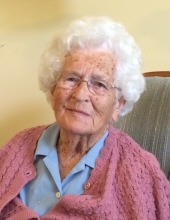 Sylvia E. Krook, 90, of New Ipswich, NH died peacefully on Wednesday, December 27, 2017 at the Good Shepherd Healthcare Center in Jaffrey after a period of declining health while she was surrounded by her loving family.

Mrs. Krook was born on January 4, 1927 in New Ipswich, NH, a daughter of the late Nicholas and Olga (Lampi) Somero. She attended Appleton Academy and graduated in 1945. After she married her high school sweetheart, they made their home in New Ipswich as chicken farmers until moving their 5 sons to Florida in 1965. They ran the Lantana Lodge and later were caretakers of an estate in Manalapan until her retirement.

Mrs. Krook was a lifelong member of the Apostolic Lutheran Church and very active in her church community. She enjoyed crossword puzzles, word games and time spent with her many grandchildren and great-grandchildren.

‘Gram’ as she was lovingly known by her family, leaves behind a Godly example that we all aspire to follow. It seemed as if her mission here on Earth was to create as many wonderful memories as she could with her family. From potato plantings, her boys' birthday dinners, anniversary Chex Mix, to her famous homemade root beer, Gram made you feel special. You never left her feeling empty – be it your heart, stomach or arms. Gram, we love you and you will be missed.

A very special thank you from the family to Shawna, Dale and Dave, for all of their love and care during her time in South Carolina.

In addition to her parents, she was predeceased by her loving husband, Paul Krook in 1993, her brothers; Martin, Philip and Robert Somero and her sister-in-law, Judy Somero.

Calling hours will be held on Saturday, December 30, 2017 from 9:30 AM to 11:00 AM in the Apostolic Lutheran Church, 117 Goen Road, New Ipswich, NH. A funeral service will follow the visitation at 11:00 AM. Burial will take place in the spring in the family lot at Smithville Cemetery in New Ipswich, NH.

To order memorial trees or send flowers to the family in memory of Sylvia E. Krook, please visit our flower store.