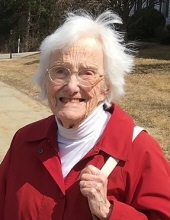 Mrs. Sylvia Gray Sears, lately of Keene, New Hampshire, died peacefully at the age of 99 in the early hours of January 4, 2023, at American House Keene. Blessedly lucid, she had, in the days surrounding the Christmas holidays, enjoyed visits from her children, her grandchildren, and her great grandchildren. She was cherished and revered in her immediate and extended family for her virtues, devotion, and wisdom.

Sylvia and her husband of 73 years, Alden, lived most of their adult lives in Bethlehem, Pennsylvania, where he was a professor at Moravian College, and she worked part-time as a social worker while raising three children. She was born in Keene, New Hampshire; he in Ludlow, Vermont. They met at Bates College where they earned their undergraduate degrees. They shared the Yankee virtue of frugality which they practiced with joy. Because of their prudence and vision, they built an extended family community of summer cottages in Winchester, New Hampshire, where generations of cousins have grown closer and learned boating, swimming, and, when the elders weren’t watching (which was rare) how to play with fire.

When her husband took a sabbatical year at Oxford, she managed an upgrade from the family’s row house in Pennsylvania to the walled home of an Oxford don in the idyllic village of Iffley. (The dollar was strong against the pound). Sylvia and Alden read Tolkien and C.S. Lewis to the children as the Thames burbled in the background. In the spring of 1964, she organized the family’s exploration of “the Continent” using the guide Europe on Five Dollars a Day—which she interpreted as meaning five dollars for the whole family. The wonderful effect of this was that the family stayed in all sorts of interesting places—pensiones in Italy, a convent in Rome, and various bed-and-breakfast establishments. Her eldest, Stanton, was emerging as an artist so Sylvia made sure he (and other family members) saw, for example, Michelangelo’s Pieta, at touchable range—which was possible in those days. The Louvre, Uffizi, and the Rijksmuseum were all on the list. In later years, she was an inveterate armchair traveler, always curious about experiences others had had in every corner of the world. Moravian College international students lived for many years in the family home which was proximate to the campus.

Both as social worker and mother she was splendidly skilled with children, able to read the signs of impending meltdown and gently re-direct. She made sure children were busy and occupied and learning—without necessarily knowing it. When grandchildren arrived she set aside time (and a special space) for reading with each one.

In Bethlehem she was active in community organizations, most notably the League of Women Voters, for which she was the long-serving local president. For many years she put her formidable command of grammar and usage to use as a volunteer English language tutor for international graduate students and their spouses. She welcomed these students and their families into her home and built lasting friendships. Graduating students who were returning to their home countries would introduce her to new arrivals with glowing recommendations.

When they were well into their eighties, Sylvia and Alden still enjoyed dancing together. At Forest Lake in Winchester, he would tend the buildings and grounds while she organized the Saturday Night picnic. While not a natural athlete, Sylvia encouraged physical activity and the mastery of skills. Because of her long-established habit of daily walking, she remained mobile to the very end of her life.

She is survived by three children, Stanton, Douglas, and Martha; six grandchildren, Russell and Marshall Anderson, Sarah Sears Qin and Hannah Sears, Grayson Sears and Tansy Sears; and three great grandchildren, Tristan Anderson-McKellar and Elliott Anderson-McKellar, and Silvia Qin. She cherished her children’s spouses Andrea Myklebust, Mary Pennock Sears, Cathy Anastasion, and Douglas Anderson. Due to the breadth of her lifespan she was able to welcome to the family the spouses of her grandchildren, Yening Qin, Kathryn McKellar, and Hannah Campbell.

Her legacy is physically manifested in the family’s cherished retreat in New Hampshire. The far greater legacy is the set of habits, skills, and dispositions that she worked hard to instill and nurture in her children and grandchildren—always in understated and diplomatic ways. Her family is abundantly grateful for her devotion and will miss seeing her at her favorite spot on the porch of her cottage at the Lake, where, in later years, she would read and rest, and arise brightly to engage with whomever rapped on the screen door.

No public services are planned at this time. Burial will take place at a later date, in the Evergreen Cemetery in Winchester, New Hampshire.

To order memorial trees or send flowers to the family in memory of Sylvia Gray Sears, please visit our flower store.