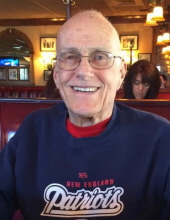 William Everett Clarke (Bill), 79, of Antrim, NH, died on Sunday, May 29th, 2022, at Concord Hospital in Concord, NH. Bill was born on November 26, 1942, in Arlington, Massachusetts, the son of Gordon Clarke and Louise (Donnelly) Clarke.

Bill grew up in Arlington, Massachusetts and graduated from Arlington High School in 1960. He was a three-sport athlete and was an alternate goalie for the 1964 US Olympic Hockey Team until dislocating his shoulder during practice, ending his Olympic dream.

Bill’s career as a salesman in the meat/food industry spanned all of his adult life. He was very passionate and dedicated to his work. Bill began working for his father’s meat and provisions company, Cook & Clarke, right out of high school until the company closed in 1976. Bill then joined Dole & Bailey as a salesperson, servicing Boston and Nantucket successfully for many years. Once Bill and his family moved to NH, he moved his territory to southern/central NH. Bill’s commitment to the company and his customers was admirable and respected by all. Bill considered the people at Dole & Bailey his second family and continued working full time until his last days.

Bill married Elaine Sylvester in South Boston in 1966 and they had 3 children, Michelle, Jeanine and Douglas. The family lived in Lexington, then Billerica Mass. until moving to Jaffrey, NH in 1977. Bill and Elaine parted ways in 1985, but the family unit remained close throughout the years. Bill lived in Fitzwilliam, NH, and spent the last few years living in Antrim NH.

Bill was extremely social and outgoing and a friend to many. He had a great sense of humor and spent his earlier years as the “life of the party”. Bill was a loving and supportive father and grandfather, and his grandchildren were his pride and joy. Bill will be greatly missed.

Bill was predeceased by his parents Gordon and Louise Clarke, and his beloved brother Gordon (Buddy) Clarke.

Family and friends are invited to gather and remember Bill on Saturday, June 18,2022 from 11:00 AM to 2:00 PM at the Cournoyer Funeral Home, 33 River Street, Jaffrey, NH. Refreshments will be served.

To order memorial trees or send flowers to the family in memory of William 'Bill' Clarke, please visit our flower store.