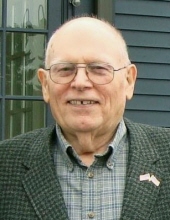 William C. Hodgdon, Jr., 86, of South Berwick, ME, died peacefully on September 11, 2020 at Wentworth-Douglass Hospital in Dover, NH after a period of failing health.

Bill was born on November 11, 1933 in Gardiner, ME, son of the late William and Helen (Cushman) Hodgdon. He was a graduate of Freedom Academy in Freedom, ME.

Bill joined the US Marine Corps and proudly served overseas during the Korean War where he was a mechanic. He then returned to his beloved home state and became a game warden in northern Maine for several months. When he moved back to the mid-coast region, he completed a three-year apprenticeship program at Bath Iron Works beginning as a journeyman pipefitter. It was around this time he met his future wife, Arlene Emerson. They married in June of 1959, moved to South Berwick and raised their family.

Now in South Berwick, Bill continued his career as a government civil servant at the US Naval Shipyard in Kittery, retiring as an estimator and planner. Not yet ready to hang up his hat, he enjoyed several more years sharing his love and knowledge of outdoor sports with the patrons of Kittery Trading Post before “officially” retiring.

Bill was the embodiment of “still waters run deep”, who loved spending time with his family at home and in nature. There are numerous fond memories with him on family camping trips, fishing in remote locations, hikes in the woods and day trips to fall fairs. He was always there to cheer on his children, Deborah, Michael and Linda at sporting events, and later on for his granddaughter, Hannah, with whom he shared a special bond.

He was a voracious reader, an avid photographer (setting up his own darkroom to develop and print), and history buff. He also enjoyed cooking, especially savory baked beans, chowders, flakey biscuits, and steaks on the grill.

Bill was a longtime member of the First Parish Federated Church in South Berwick. And, in his younger years, the Independent Order of Odd Fellows (I.O.O.F).

A private memorial service for Bill will be held with family. At a later date to be announced, a burial service will take place in South Berwick with Military Honors, where family and friends may attend.

To order memorial trees or send flowers to the family in memory of William C. Hodgdon, Jr., please visit our flower store.