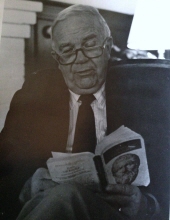 William J. Ball, 83, of Jaffrey died peacefully on Thursday, August 8, 2013. He had been a resident Jaffrey for 25 years and had lived in the Monadnock region for over 45 years. He was born August 31, 1929 in Plainfield, NJ, son of the late John and Frances (Warren) Ball. He was a graduate of Plainfield High School. He earned his bachelor and master's degrees in French from Rutgers University. He served in the United States Air Force as a first lieutenant and was a B-29 bomber pilot during the Korean War; he was honorably discharged in 1953.

Bill was a professor of humanities for 26 years at Franklin Pierce University in Rindge, NH, retiring in 1994. He taught many different subjects, including French, public speaking, English, and his greatest teaching passion, philosophy. When asked what makes an exceptional professor, his reply was, "the resolve to do as little damage to the student and to the subject as in my power!" Bill felt his greatest honor in all the years he was at Franklin Pierce was writing the University's alma mater. In his retirement he enjoyed listening to great music, watching football and baseball, talking to people, and visiting the ocean with his wife, Norma

Bill also spent many years performing with the Peterborough Players in Peterborough, NH and appeared in bit parts in numerous films, television shows and commercials, most notably as the diner server in an Acura car ad where he inquired, in a strong Maine accent, "You up here on vacation?"

Bill once said the two most memorable events of his life were getting married and becoming a father. He leaves behind his beloved wife of 53 years, Norma (Davis) Ball of Jaffrey, and his daughters, Ingrid Ball of Boston, MA, Mary Ball of Jaffrey, NH, and Frances Ball of Westminster, VT. He also leaves his brothers-in-law and sisters-in law, Robert and Susan Davis of Wheaton IL, Marylin and Dewitt Davis of Penacook, NH, Patricia and Al Gaboric of Austin, TX, and numerous nieces and nephews. He was pre-deceased by his sister, Pat Bruckner of St. Petersburg, FL. In the words of his wife Norma, Bill was a kind, intelligent, funny, wonderful man with sparkling blue eyes. He will be greatly missed by all who knew him.

A memorial service will be held at a later date to be announced. Expressions of sympathy may be sent to Norma and the family at 65 Dean Farm Road, Jaffrey, NH 03452.

To order memorial trees or send flowers to the family in memory of William J. Ball, please visit our flower store.