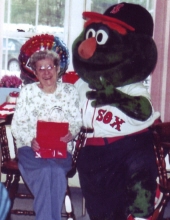 Yvonne C. Davis, 96, of Jaffrey, died peacefully on Friday, July 11, 2014, at the Good Shepherd Healthcare Center in Jaffrey after a period of failing health.

She was born on December 11, 1917 in Jaffrey, NH, the daughter of the late Ernest and Edith (Jalbert) Caron. She had attended local schools and had been a lifelong resident of Jaffrey.

Yvonne had worked at D.D. Bean and Sons in Jaffrey and retired in 1979. Yvonne was a communicant of St. Patrick Church in Jaffrey. She was an avid Red Sox fan and loved to build puzzles.

Yvonne was preceded in death by her husband, George D. Davis on September 6, 1963, and by her daughter Edith M. Davis. Her brother Philip J. Caron and her sisters Pauline Fournier and Diana Ouellette also died earlier.

She is survived by her daughter, Janet LaCroix of Jaffrey; her son George Davis of Lakeland, Fla; 4 grandchildren; 7 great-grandchildren; her brother Ernest Caron of Jaffrey, and many nieces, nephews, cousins and close friends.

In lieu of flowers, memorial contributions may be made in Yvonne’s name to a local charity of one’s choice.

To share memories and photos, or to send condolences to Yvonne’s family, please visit her permanent online memorial at www.cournoyerfh.com

To order memorial trees or send flowers to the family in memory of Yvonne C. Davis, please visit our flower store.